Airstream’s Director, David Skeldon, discusses the current market conditions in Europe for leasing regional aircraft and explores the challenges faced by the sector…

Published in the Sept/Oct edition of ERA’s Regional International magazine.

How is the European regional leasing market currently performing?

It has become apparent in recent months that the European regional leasing market is softening. Over the last 12 months, Airstream has sold or leased some 24 aircraft, 22 were sales, with 2 being ACMI leases. Several of the 22 sales were finance leases, a structure that appears to be increasing in popularity. Airstream has also experienced a significant increase in demand from the airlines for short-term uplift on an ACMI basis. This may be due to short-term confidence in the market but uncertainty created by Brexit, the refugee crisis and the general perception that we are nearing the end of a sustained upward cycle since the financial crisis of 2008 is preventing airlines from committing to aircraft in the longer term. An oversupply of large turboprops and regional jets has been created by high manufacturer production rates which are beginning to prove unsustainable. We have seen ostensibly strong aircraft types such as ATR42/72s and E-Jets struggle to be absorbed back into the fleet, and there continues to be a substantial oversupply of 50-seat regional jets worldwide.

What are the main challenges for the leasing sector currently?

There has been an influx of new-to-market lessors together with an increase in capital made available for aircraft transactions. However, the terms of spend for these lessors typically dictate that the capital is allocated to larger US dollar value transactions for relatively younger aircraft with a requirement for better credits in more favourable jurisdictions. Many smaller or start-up European regional airlines typically look to lease those aircraft requiring a lower capital outlay and therefore it has been somewhat difficult to source lessors willing to look at these transactions. This is not so true for aircraft already held in their portfolio but where a bespoke transaction is required such that the lessor is to purchase an asset for onward lease to the airline it has been challenging. 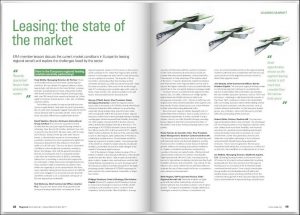